Francis Kéré, the award-winning architect from Gando, Burkina Faso, has been commissioned to design the Serpentine Pavilion 2017, responding to the brief with a bold, innovative structure that brings his characteristic sense of light and life to the lawns of Kensington Gardens.

Full Professor of Urban Planning at Politecnico in Milan, Stefano Boeri has been a guest professor at various universities, including Harvard University’s Graduate School of Design (GSD), the Strelka Institute in Moscow and the Berlage Institute in the Netherlands, the École Polytechnique Fédérale de Lausanne. He has been recently appointed Director of a post-doctoral research program at Tongji University in Shanghai, where he is developing an international research platform called Future City Lab (FCL). Stefano Boeri was director of the international magazines “Domus” (2004-2007) and “Abitare” (2007-2011) and he published many books. In 1999, as architect and town planner, Stefano Boeri founded Boeri Studio, then Stefano Boeri Architetti. In 2013 Stefano Boeri founded, together with Yibo Xu, Stefano Boeri Architetti China, located in Shanghai.

Mohsen Mostafavi is Dean and the Alexander and Victoria Wiley Professor of Design at the Harvard University Graduate School of Design. An architect and educator, his work focuses on modes and processes of urbanization and on the interface between technology and aesthetics. Mostafavi is the author, co-author, and editor of many books, including Ecological Urbanism (co-edited 2010 and recently translated into Chinese, Portuguese, and Spanish), Architecture is Life (2013), Nicholas Hawksmoor: The London Churches (2015), Portman's America & Other Speculations (2017), and Ethics of the Urban: The City and the Spaces of the Political (2017).

Saskia Sassen is the Robert S. Lynd Professor of Sociology and Member, The Committee on Global Thought, Columbia University (www.saskiasassen.com). Her latest book is Expulsions: Brutality and Complexity in the Global Economy (Harvard University Press 2014) now out in 18 languages. She is the recipient of diverse awards, including multiple doctor honoris causa, the Principe de Asturias 2013 Prize in the Social Sciences, and made a Foreign Member of the Royal Academy of the Sciences of Netherland.

Diébédo Francis Kéré is the principal architect at Kéré Architecture based in Berlin, founded in 2005. Kéré was born in 1965 in Gando, Burkina Faso, west Africa and trained at the Technical University of Berlin.  Kéré Architecture has been recognised nationally and internationally with awards including the Aga Khan Award for Architecture (2004) for his first building, a primary school in Gando, Burkina Faso; LOCUS Global Award for Sustainable Architecture (2009); Global Holcim Award Gold (2011 and 2012); Green Planet Architects Award (2013); Schelling Architecture Foundation Award (2014) and the Kenneth Hudson Award – European Museum of the Year (2015). 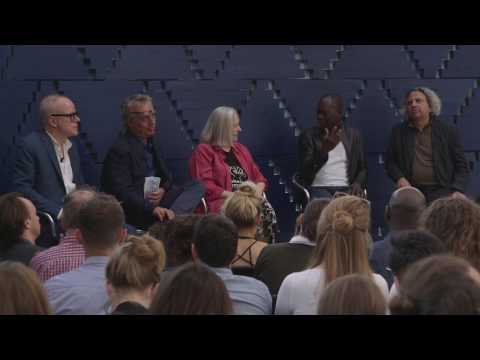