Symposium: The Shape of a Circle in the Mind of a Fish, Part 1: Language | Serpentine Galleries

Symposium:
The Shape of a Circle in the Mind of a Fish, Part 1:
Language

At the bottom of the sea, a small puffer fish performs a labour of love, making elaborate sand circles, precise in their geometry, astounding in their aesthetics. What shape does the shape of that circle take before it is made? How to understand the movement that constitutes it as a language and, most importantly, what is at stake when we reconsider language and communication in an interspecies landscape?

Inspired by Ian Cheng’s exhibitions, BOB and Emissaries, and to launch its General Ecology project, Serpentine launched a long, durational symposium and research project in several parts, that took place over eighteen months. Titled The Shape of a Circle in the Mind of a Fish, the gatherings brought together a wide range of thinkers and practitioners from various disciplinary ambits across art, literature, environment, science and technology to explore the porous boundaries between human, non-human animal, vegetal, mineral, mycellar and artificial consciousness and intelligence.

The first symposium took place on Monday 28 May and brought together choreographers, scientists, artists and writers at the ZSL London Zoo to reflect about cognition and language in tandem with affect, agency and sensibility across species and beings.
View Part 2: We have never been one.

The Shape of a Circle in the Mind of a Fish series is curated by Lucia Pietroiusti (Curator, General Ecology, Serpentine) and writer and editor Filipa Ramos. Part 1: Language was programmed in collaboration with Ian Cheng. Advisors to Part 1 included biological systems scientist Phoebe Tickell and Serpentine CTO Ben Vickers.

The Shape of a Circle in the Mind of a Fish, Part 1: Language is supported by the Embassy of Denmark in the United Kingdom and Belmacz, London.

Michela de Mattei, Estée Lauder: Adapting (2016, 4'03''), performed by Lora Juodkaité.
In this short film sequence, artist Michela de Mattei recorded and edited a series of Skype conversations with a talking myna bird, Estée Lauder. The conversations reflect on embodiment and exchange across species, marking a deepening relationship between the artist and her interlocutor.

Rasmus Nielsen, from collective Superflex, discusses how puffer-fish circles, biomimicry and translation inform the group's current interest in agency and aesthetics beyond the human and the project they are developing in a recently discovered island in the South Pacific.

Allora & Calzadilla, The Great Silence (2016, 16'53''), in collaboration with Ted Chiang.
The silent, subtitled, inner monologue of a parrot on the brink of extinction, reflecting on voice, silence, extraterrestrial life and human folly. The film is focused around the Arecibo Observatory, which captures and transmits radio waves from and into outer space - and whose site is also home to the critically endangered Puerto Rican parrots.

Author Ted Chiang discusses the making of The Great Silence as well as other works addressing interspecies communication, including "Story of Your Life", the novella which was adapted into the 2016 feature film, Arrival.

Diana Reiss, Professor of Psychology at Hunter College, New York, was joined by a special guest to present experiences from her research in dolphin communication, the function of technology within this research, as well as the horizon of an 'Interspecies Internet'.

Symposium: The Shape of a Circle in the Mind of a Fish: we have never been one

Ian Cheng populated the Serpentine with artificial life in a two-part exhibition, starting with BOB (6 March – 22 April 2018) and continued with Emissaries (24 April – 28 May 2018). 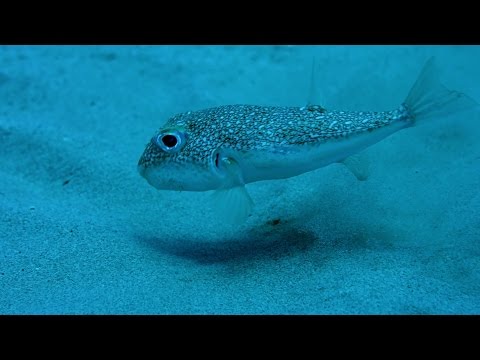 Claire Filmon performing Simone Forti's Sleep Walkers / Zoo Mantras at The Shape of a Circle in the Mind of a Fish, Part 1: Language, 28 May 2018.