A survey of installations and films from the celebrated Swiss duo.

Playing on audience expectations, Fischli and Weiss’ exhibition for the Serpentine Gallery returned again and again to their fascination with the mundane and the absurd. It included their meticulous trompe l’oeil, Ohne Titel (Untitled, 1995 – 1996), a fabrication of one of their studios, each object carved by hand out of polyurethane.

Divided between three rooms was their 96-hour video piece honouring 18 months of their lives, shot in and around Zurich (where Fischli and Weiss both live), which inspected visions of the world easily overlooked. Another side to Zurich was on display in Kanalvideo (Canal Video, 1992), a film that travels the sewer pipes of their Swiss home city.

There were also two studies in light: Le Rayon Vert (The Green Light, 1990), a sculpture made of a plastic cup, flashlight, tape and a plastic turntable, and Surrli (1986), in which two slideshow carousels show off the colourful, abstracted activities of a light machine. 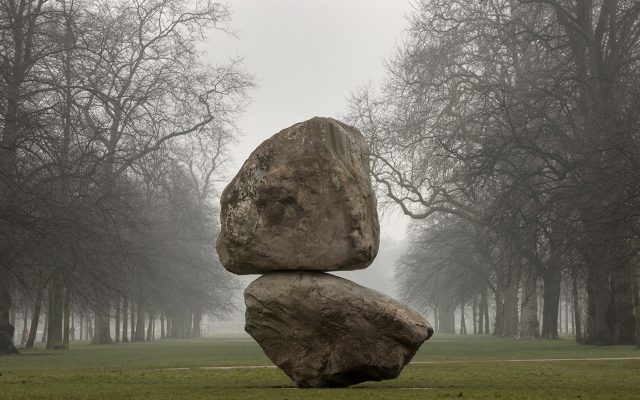 Fischli/Weiss: Rock on Top of Another Rock

'Rock on Top of Another Rock' was the first public sculpture by Swiss artists Fischli/Weiss to be commissioned in the UK.