Since starting out in the 1950s, Richard Hamilton embraced many different media, including painting, printmaking, installation, typography and industrial design.

This major exhibition reassessed the nature of the Hamilton’s pioneering contribution, focusing on his political works. The installations, prints and paintings on view took international politics, riots, terrorist acts and war as their subject matter, examining how these conflicts are represented by the media, especially via television and the internet.

Hamilton saw great changes in communication technologies throughout his working life. In 1969 he noted that: “In the Fifties we became more aware of the possibility of seeing the whole world, at once, through the great visual matrix that surrounds us, a synthetic ‘instant’ view. Cinema, television, magazines, newspapers flooded the artist with a total landscape.” Through its fragmentation of images, manipulation of space and reference to different styles and genres, Hamilton’s work interrogates the representations that surround us.

Yet his analysis of the image is counterbalanced by an underlying allegoric lyricism, through which he reinvigorated the genres of portraiture and history painting. This survey of Hamilton’s political works, presented just a year before the artist’s death in September 2011, also explored in depth the artist’s working processes and the varied ways he used photographic material. It investigated his longstanding interest in creating multiples of a single, iconic image as both a mirror and a critique of the visual overload created by the media. 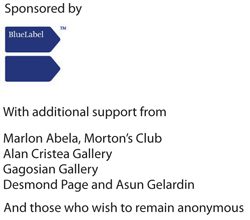