Lygia Pape was a leading Brazilian artist whose work brings together formal rigour and daring experimentation.

Pape was a founding member of the Neo-Concrete movement, which was dedicated to the inclusion of art into everyday life. Pape’s early work developed out of an interest in European abstraction; however, she and her contemporaries went beyond simply adopting an international style, and started to draw on their own local situation. Neo-Concretism is often seen as the beginning of contemporary art in Brazil, and Pape’s work – which focus on the coming together of aesthetic, ethical and political ideas – has formed an important part of Brazil’s artistic identity.

The exhibition presented work from throughout Pape’s career, including early drawings and poems from her Concrete period to her Neo-Concretist Livros (Books) and Caixas (Boxes) series, as well as ballets and performances such as Divisor (Divider) and O ovo (The Egg). Many of these works were created in response to the political repression growing in the late 1960s and reflected the artist’s strongly critical views on Brazil’s elite. Pape’s late works focus on the depiction of emotion and sensation, and have been described by Hélio Oiticica – a contemporary of Pape’s – as ‘permanently open seeds’.

The exhibition was organised by the Museo Nacional Centro de Arte Reina Sofía in collaboration with Projeto Lygia Pape and the Serpentine Gallery.

‘My concern is always invention. I always want to invent a new language that’s different for me and for others, too… I want to discover new things. Because, to me, art is a way of knowing the world… to see how the world is… of getting to know the world‘ –Lygia Pape

‘Conceptually and formally meticulous, yet fills the wall with colour and rhythm’ –London Evening Standard

‘Brimming… with an irrepressible joy’ –The Times 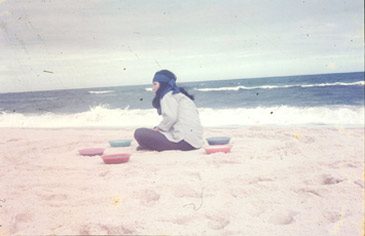