Skip to content
Serpentine Galleries →What’s On →Inside Out
Exhibition

The Serpentine Gallery commissioned five artists to exhibit on the gallery’s lawn while renovations to the interior of the gallery were carried out.

The programme began with Rasheed Araeen’s imposing scaffolding-like installation, launched at the beginning of October 1996. It was followed soon after by artist Bill Culbert’s piece involving tip-trucks parked on the gallery lawn, loaded with an ethereal blue light. The trucks appeared as massive light-boxes and were placed at angles that could be seen from the road. A small-scale tree-themed installation by Richard Deacon came next in the spring of 1997, and was followed by another modest-scale but poignant work by Anya Gallaccio. Entitled Keep Off the Grass, Gallaccio’s project involved the nurturing of seeds planted in areas left from the preceding commissions on the lawn in order to restore the grass. The last project in the Inside Out series was Tadashi Kawamata’s large-scale construction using materials salvaged from the gallery’s renovation project.

Rasheed Araeen – To Whom it May Concern

Anya Gallaccio – Keep Off the Grass

Rasheed Araeen: To Whom It May Concern

This was installed on the Serpentine's lawn as part of the Inside Out series during the gallery’s renovation in 1996/97. 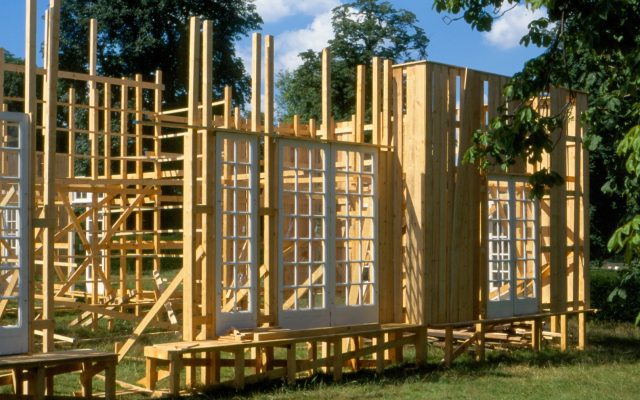 This was Japanese artist Tadashi Kawamata’s first installation sited in an open space in Britain.