ACT ESOL Language, Resistance, Theatre training workshops are the result of a three-year research process undertaken by Participatory ESOL practitioners and Participatory Theatre practitioners, exploring how to implement Theatre of the Oppressed in the ESOL classroom.

The training shared the experiences and learning from this process, and explained the work to ESOL practitioners to implement in their own contexts.

Throughout the day, participants tried out the different theatre techniques, games and exercises that appear in theACT ESOL Language, Resistance, Theatre resource and got hands-on experience in how participatory theatre can be used with ESOL students to develop language. There were also discussions and reflections on the ethics of this work alongside how these processes can politicise the classroom space.

The collectively developed methodologies shared in the training workshops and resource are part of a radical ESOL education that is interested in transformation as opposed to inclusion.

The training was led by members of the ACT ESOL research group and was for ESOL practitioners and/or those working in migrant justice contexts.

Refreshments and a light lunch were provided.

English for Action believes in the power of education for social change. They deliver English language courses (ESOL) with partner organisations in areas where there is a clear need. Their classes are spaces where students can not only learn English but also, using community organising methods, can connect with other people in their communities, share experiences, discuss important social issues, develop new skills and take action to effect change in their own lives, in their communities or even further afield. They are leading practitioners of ‘participatory ESOL’, an innovative and liberatory approach to adult education that builds students’ critical capabilities, builds on existing strengths and engages with and seeks to change the world, inside and outside the classroom. They use participatory methods in their teaching and through their training and research, encourage others to join in.

Implicated Theatre has been working since October 2011 in a series of workshops and performances that began at the Serpentine Galleries; Edgware Road Project. Instigated by artists from no.w.here and working with theatre director Frances Rifkin, the experimental workshops explore the relationships between political speech and action, the self and the collective, voice and silence. Now in its eighth year of working and performing, Implicated Theatre has been forming close relationships with migrants rights groups and unions. The organisation creates theatrical interventions inspired by real-life struggles and highlighting issues of social justice and have worked in collaboration with the Migrants Resource Centre and migrant’s rights organisations such as the Anti-Raids network, Latin American Workers Association, Justice for Domestic Workers, English for Action and with UNITE’s Hotel Workers Union and the United Migrant Workers Education Project (UMWEP). 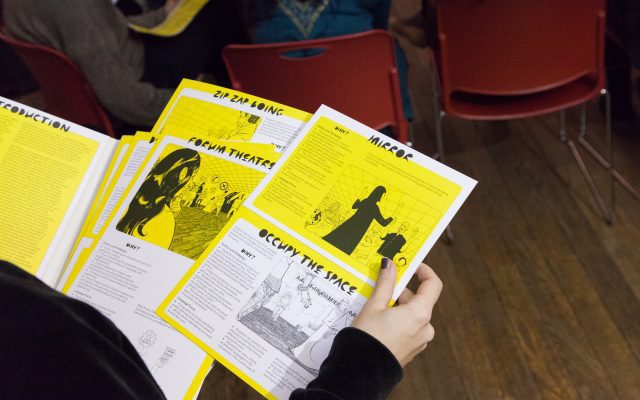 ACT ESOL Language, Resistance, Theatre training workshops explored how to implement Theatre of the Oppressed in the ESOL classroom.