Skip to content
Serpentine Galleries →What’s On →Love, War and Other Gestures: A Study Evening
Live

Love, War and Other Gestures: A Study Evening

Inspired by Etel Adnan’s literary and philosophical teachings, this study evening conjured love and other poetic gestures in the face of violence, featuring talks, screenings and other interventions. The evening included talks by Omar Berrada, Cynthia Enloe and Eyal Weizman, as well as screenings of films by Tracey Moffatt and William Kentridge.

Omar Berrada gave a talk on Adnan’s literary and philosophical works, Cynthia Enloe delivered a lecture on militarisation and gender, Eyal Weizman talked about the archaeology of the human and there were screenings of the films History of the Main Complaint (1996) and Felix in Exile (1993-94) by William Kentridge, as well as Love (2003) and REVOLUTION (2008) by Tracey Moffatt.

Omar Berrada is a writer and curator and the director of Dar al-Ma’mûn, a library and artists residency in Marrakech. Previously, he hosted public programmes at the Centre Pompidou and radio shows on French national radio and lent his voice to Christian Dior’s ghost in Frédéric Tcheng’s Dior and I. In 2016 he has edited The Africans, a book on racial politics in Morocco and curated Black Hands, a solo show of M’barek Bouhchichi’s work at Kulte Gallery (Rabat), as well as two exhibitions centring on the work and archive of writer and filmmaker Ahmed Bouanani at the Marrakech Biennale and at Witte de With in Rotterdam. He is currently a visiting scholar at New York University.

Cynthia Enloe is a feminist scholar activist who investigates the gendered workings of militarisation in all its blatant – and subtle – guises. She is Research Professor at Clark University in Massachusetts and the author of 14 books. Among her most recent books are Globalization and Militarism: Feminists Make the Link (new, updated edition, 2016) and Bananas, Beaches and Bases (new, updated edition, 2014). Her other books include Nimo’s War, Emma’s War: Making Feminist Sense of the Iraq War (2010) and Seriously! Investigating Crashes and Crises as if Women Mattered (2012). Enloe’s works have been published in Korean, Japanese, Turkish, Swedish and French. She has received honorary degrees from SOAS, Connecticut College, Clark University and University of Lund.

Tracey Moffatt (b. Brisbane, Australia, 1960) works in photography, film and video. Moffatt represents Australia at the 2017 Venice Biennale and her exhibition Laudanum and other works, is currently on view at the Art Gallery of New South Wales, Sydney (through 4 September 2016). Moffatt has exhibited extensively in museums and biennials all over the world. Her short film Night Cries was selected for official competition at the 1990 Cannes Film Festival. Her first feature film beDevil was also selected for Cannes in 1993. Her work has featured in, among others, the 1997 Venice Biennale; the Biennials of Sydney (1993, 1996, 2008), Singapore (2011), São Paulo (1998) and Gwangju (1995). In 2012, the Museum of Modern Art, New York, presented a comprehensive retrospective of Moffatt’s film and video work, featuring screenings of all her major works and a 10-day series of talks. After many years living abroad, Moffatt began a three year exploration of places in her native Australia that were scenes of important events in her own life and that of her family. The resulting body of work, her first since the Plantation series of 2009, reflected on the way her personal story is intertwined with the, often tragic, history of race relations in Australia. Yet, as Moffatt pointed out, it can also be “opened up” and read as a universal meditation on the significance of land and place.

Eyal Weizman is an architect, professor of spatial and visual cultures and director of the Centre for Research Architecture at Goldsmiths, University of London. Since 2014 he has been a global professor at Princeton University. In 2010 he set up the research agency Forensic Architecture (FA). The work of FA is documented in the exhibition and book forensis (Sternberg, 2014). In 2007 he set up, with Sandi Hilal and Alessandro Petti, the architectural collective DAAR in Beit Sahour, Palestine. This work is documented in the book Architecture After Revolution (Sternberg, 2014). Weizman is on the editorial board of Third Text, Humanity, Cabinet and Political Concepts and he was on the advisory boards of the ICA in London and B’Tselem in Jerusalem, amongst others. 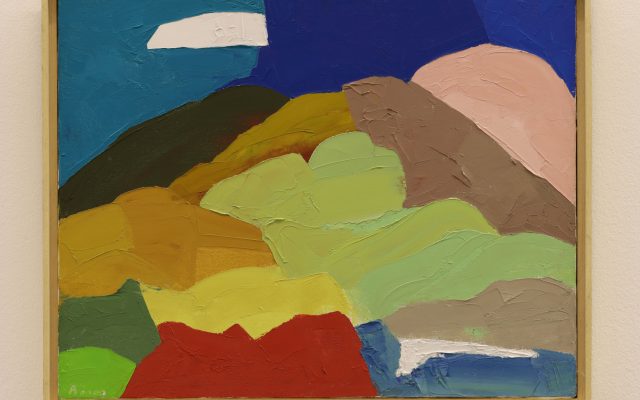 Serpentine Galleries presented the works of painter, essayist and poet Etel Adnan, who was born in 1925 in Beirut, Lebanon.