The Serpentine Gallery presented this conference on the occasion of its exhibition of the celebrated American artist Nancy Spero, the first major presentation following her death in autumn 2009.

Artists, academics and curators, including Jon Bird, Clayton Eshleman, Margaret Harrison, Hans Ulrich-Obrist, Gill Perry, Olivia Plender, Lisa Tickner and Monica Ross, gathered to discuss and celebrate the work of Nancy Spero and its relationship to feminism, literature, philosophy and theatre, specifically focusing on the distinctive understanding of the relationship between Spero’s work and that of Antonin Artaud. Documentary films of the artist made by Irene Sosa over the past 15 years are also screened throughout the conference.

Artist and activist Nancy Spero (1926–2009) was a leading pioneer of feminist art. During her 50-year career, she created a vibrant visual language constructed from the histories and mythologies of past and present cultures. Trained in the figurative tradition, Spero was greatly influenced not only by the enduring dialogue with her husband Leon Golub, but also by artists including Jean Dubuffet and by the objects and artefacts she discovered in ethnographic museums. Spero rejected the dominant post-war movements of formalist Abstraction and Pop Art in the 1950s, developing a more ephemeral way of working that used paper and collage, gouache and printmaking — a process she described as allowing for ‘all manner of processions, conflicts, interruptions and disruptions’. Spero created an identity through the acts of borrowing and disguise. In early work, texts as well as images were enlisted from a wide range of sources to express alienation, disempowerment and physical pain. Directly quoting the writing of poet and playwright Artaud, Spero voiced her anger at being exiled as a female artist to the peripheries of the art world. Spero’s often radical work made strong statements against war, male dominance and abuses of power, presenting compelling arguments for tolerance and a non-hierarchical society. Yet her work was never simplistically utopian. ‘Utopia, like heaven,’ she once remarked, ‘is kind of boring.’

Margaret Harrison, renowned artist and pioneer of feminist art, talks about her dialogues with Spero and their many shared histories. Harrison has exhibited extensively since her first solo show in London in 1971 that was closed by the police. Her work Rape caused the show ‘Lives’ to be moved from the Serpentine Gallery to the Hayward Gallery. Harrison has most recently appeared in the touring feminist retrospective WACK! Art and the Feminist Revolution at MOCA LA and MoMA/PS1 New York and in REBELLE, MMK Arnhem; her latest show Margaret Harrison and the Girls/I am a Fantasy at Payne Shurvell Gallery in London runs until 21 May. She will be showing at MIMA this summer and next year at Long Beach California.

Jon Bird, writer, artist, curator and professor of Art and Critical Theory at Middlesex University, curated the first retrospective of Nancy Spero at London’s ICA in 1987. His presentation Nancy Spero: there and now, is a chance to gain insight in the urgency of her messages that resonate till present days. Bird is also the curator of Golub’s retrospective that opens at Reina Sofia in Madrid this May.

Gill Perry chairs a panel discussion with Bird and Lisa Tickner. Perry is Head of External Collaborations and Chair of the Open Arts Archive at the Open University. She has published a number of articles and books on modern and contemporary art, most recently Spectacular Flirtations (shortlisted for the 2007 Theatre Book Prize). Tickner is currently a visiting professor at the Courtauld Institute of Art. She has published widely on topics from 19th and 20th century art history, theory and visual culture.

Clayton Eshleman, one of the most prolific and distinguished of American poets, translators, essayists and editors, addresses in his talk Spero’s breakthrough work, Codex Artaud, and his presence as a shaman pariah. During the talk he will also read his translation of Artaud’s scorching The Return of Artaud, the Mômo and his ode to Nancy Spero. As a close friend of both Spero and Golub since the late 1960s he published reproductions of their art in both of the magazines that he edited: Caterpillar (1967-1973) and Sulfur (1981-2000).

Olivia Plender is in conversation with Serpentine Gallery’s Curator Sophie O’Brien and Monica Ross about the impact of Spero’s work on the present moment in UK. Plender is an artist based in Berlin. Her work is currently showing in the British Art Show at Hayward Gallery and in the group exhibition No Mans Land?, Centro Cultural Montehermoso, Vitoria, Spain. Later this year she exhibits at the Folkestone Triennial 2011.

Monica Ross is an artist based in Brighton. Time–based in form and subject, Ross’s performances, videos, drawings and textworks investigate how experience becomes transformed into memory and history. Her works have been presented in many exhibitions and contexts since the 1970s, when feminism and related movements for social change shaped her experimental and often collaborative practice. In 2008, Ross performed the first of 60 recitations in her series ‘Anniversary—an act of memory: solo, collective and multi-lingual recitations from memory of the Universal Declaration of Human Rights’ to mark the 60th anniversary of the UDHR in the ‘Taking Liberties’ exhibition, the British Library. Act 31 will be presented in Brighton Festival 2011. www.actsofmemory.net / www.youtube.com/actofmemory

Irene Sosa is a filmmaker. She met Spero in the winter of 1988 while working at the studio the artist shared with her long-time companion and fellow artist Golub in New York’s West Village. She has been documenting the art of Spero over the past 15 years. 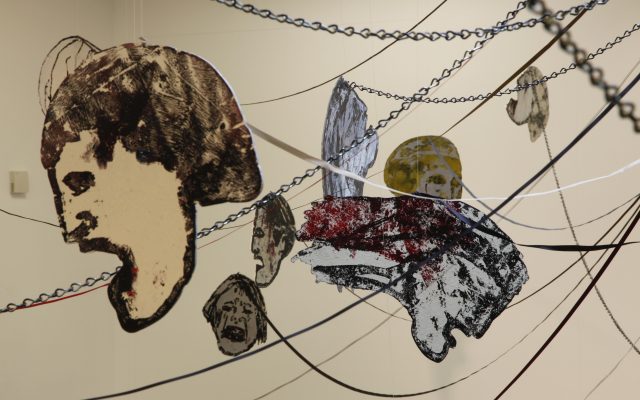 The first major presentation of the celebrated American artist Nancy Spero since her death in autumn 2009.