Park Nights 2015: An Evening of Poetry

On the occasion of the 50th anniversary year of the International Poetry Incarnation at the Royal Albert Hall, poets and performers gathered for an evening in the Pavilion.

Rachael Allen studied English Literature at Goldsmiths College, University of London. A pamphlet of her poems is published by Faber. Her reviews and essays have appeared in Ambit magazine, Dazed and Confused and Music & Literature. She is the poetry editor for Granta, co-editor of the poetry anthology series Clinic and the online journal Tender.

Kayo Chingonyi is a writer, editor, events producer, and creative-writing tutor. His poems have been published in a range of magazines and anthologies and in a debut pamphlet entitled Some Bright Elegance (Salt Publishing, 2012). In 2013 he was awarded a writing residency at Cove Park (Scotland) as well as the Geoffrey Dearmer Prize from the Poetry Society. He represented Zambia at Poetry Parnassus, is a fellow of the Complete Works programme for diversity in British Poetry, and has been invited to give readings and performances across the UK and around the world.

Andrew Durbin is the author of Mature Themes (Nightboat 2014) and Blonde Summer (Nightboat 2016). He writes about art for Mousse and elsewhere. He co-edits the press Wonder and lives in New York.

Renee Gladman is an artist and writer preoccupied with lines, crossings, thresholds, geographies, and syntaxes as they play out in the interstices of poetry and fiction. She is the author of eight published works, including a cycle of novels about the city-state Ravicka and its inhabitants, the Ravickians. Morelia, a novella, and Calamities, a collection of essays, are forthcoming in 2016. Her current projects, a series of drawings (Prose Architectures) and a novel-in-progress, explore the continuum along which, in some gradual unfolding, sentences become drawings. She lives in the northeastern United States.

Michael Horovitz founded New Departures publications and Live New Departures roadshows in 1959; Jazz Poetry SuperJams in 1970 and the Poetry Olympics festivals in 1980. He has produced some 50 books of poetry and prose including A New Waste Land and Wordsounds & Sightlines as well as various DVDs and recordings. His most recent collaboration with musicians resulted in two Jazz Poetry SuperJam records, an LP and Single from Gearbox Records also featuring Damon Albarn, Graham Coxon and Paul Weller. Introducing him in New York, Allen Ginsberg characterised Michael as a “popular, experienced, experimental, New Jerusalem, Jazz Generation, Sensitive Bard”, in the same year that Vogue very unkindly dubbed him “the worst-dressed poet in Britain” (www.poetryolympics.com).

Holly Pester is a poet and practice-based researcher. She works in song, sound and speech-mattered poetry. Her collection of poetry, prose, gossip and anecdote as forms of archive enquiry was published by Book Works and was developed through a residency at the Women’s Art Library. She is Lecturer in Poetry and Performance at University of Essex.

In 2015, Heather Phillipson will present solo exhibitions at the Istanbul Biennial, Performa New York, Sheffield Doc Fest, Opening Times (otdac.org), Schirn Frankfurt, and will be Writer in Residence at the Whitechapel Gallery. Her recent solo exhibitions and events have taken place at Tate Britain, Bunker259 (New York), BALTIC Centre for Contemporary Art, the ICA and include a video commission for Channel 4 television. Phillipson is also an award-winning poet and was named a Next Generation Poet in 2014. In September 2014, Phillipson presented the flavour of cooling enormities as part of the Serpentine’s Park Nights series. In October 2014, she designed the stage of the Extinction Marathon at the Serpentine North Gallery.

Vanessa Vie was born in Aviles, Asturias, Northern Spain. Since 1993 she committed to the visual arts. Before long, music, performing arts and poetry became her main activities. In 2000, Vie resolved to live and work in London, largely in consequence of reading William Blake. She has presented happenings inspired by the work of Dylan Thomas, Rumi and others. Vie’s visual art frequently interacts with her words and music, so that picture-poems, lyrics, song-poems and other performance pieces relate to one another in galleries, as well as in print, recordings and film. In 2012, she met poet, artist and iconoclast Michael Horovitz, whose encouragement, inspiration, and active partnership go on feeding her muse. The duo’s renditions of texts by Lorca, Blake, Emily Dickinson and others are a staple of Michael’s Jazz Poetry SuperJams. Her poetry has most recently been published in Steve Luttrell’s Portland-based magazine The Cafe Review. Vanessa Vie has been part of two alternative rock bands, Ithaca (1995) and Rockatron (2005). 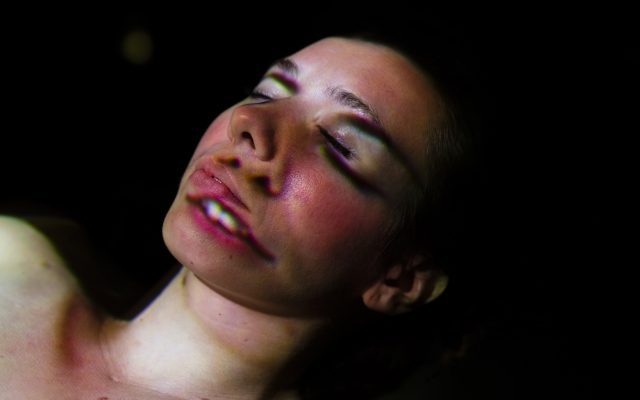