Skip to content
Serpentine Galleries →What’s On →Park Nights 2016: Towards a Radio Ballad: Songs of the Journey
Live

The sound piece that accompanied the performance, is a sketch working towards a possible Radio Ballad, taking its cue from Charles Parker’s original BBC Radio Ballads a series that aired from 1958-64. With composer Patrick Farmer and director Frances Rifkin.

Who are you when you work?
What happens to your story?
What remains visible?
What do you see when you are watching someone work?
What is visible behind the tray?
Here are the stories on the other side of the tray.

To find out more about Implicated Theatre watch our two videos:

‘What Country Friends Is This?’
A film by Hydar Dewachi
In Summer 2014 Implicated Theatre presented an immersive theatre event based on experiences of migratory hope, fear, despair and anticipation. The performance came out of several workshops, from stories of the members of Implicated Theatre. Hydar Dewachi filmed these rehearsals and the final performance. In Shakespeare’s Twelfth Night, Viola asked “What country, Friends, is this?” Travelling for refuge, change, and establishing new lives was as much a part of the world then as it is today.

‘We Are Implicated, So Are You…’
In June 2015, Implicated Theatre created a participatory performance emerging from a series of workshops using Augusto Boal’s Theatre of the Oppressed. Created from thoughts and experiences of its players, its themes of invisibility, discrimination and injustice, achievement, change and aspiration are shared as elements of the experience of going to live in a new city. We are left to ask how we can collectively listen to lives unseen and resist power unchecked.

Implicated Theatre has been working since October 2011 on a series of workshops and performances forming part of their residency with the Serpentine Galleries’ Edgware Road Project. Instigated by artists from no.w.here and working with theatre director Frances Rifkin, the experimental workshops explore the relationships between political speech and action, the self and the collective, voice and silence. Forming close relationships with migrant’s rights groups and unions, Implicated Theatre creates theatrical interventions inspired by real-life struggle, and highlighting issues of social justice.

Patrick Farmer is a musician and sound artist who works within improvisation, scores and composition. Commonly referred to as a percussionist, Farmer will often enlist the help of a drum as a resonator for natural materials or for filtering field recordings. He has performed throughout Europe and America, including concerts at ICA, Stockholm National Gallery, EyeDrum, The Radiator Festival, Derby Jazz Rhythm A Ning, and many others. He has forthcoming residencies at Q02 in Brussels and MOKS in Estonia. In 2008 Farmer co-founded the record label Compost and Height, which focuses on free downloads of improvisation and field recording.

Frances Rifkin is a theatre director, lecturer and trainer with a wide-ranging career in theatre, higher education and organisational consultancy. She is the artistic director of Utopia Arts working mainly as a director in Political and Community theatre. Trained with Augusto Boal, with extensive experience in Forum Theatre and has been the Director of Serpentine Galleries’ Implicated Theatre programme since 2011. Frances Rifkin is also an artistic director, oral historian, workshop leader, group worker and community arts animator.

Click here to read the full programme of Park Nights 2016. 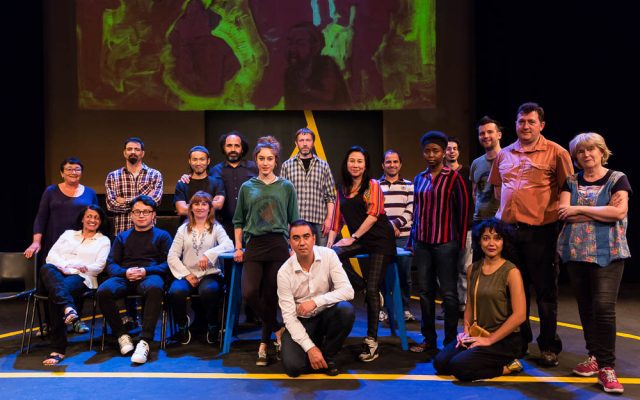 Implicated Theatre created a performance emerging from a series of workshops using Augusto Boal’s Theatre of the Oppressed.