Micachu, Brother May and Coby Sey, who collaborate as Curl, appeared alongside operatic singer Mohamed, Bianca Scout and an installation by chats. Making use of the 2017 Serpentine Pavilion’s dynamic and unique space, all the acts performed new material written specifically for this show.

Curl’s recent singles, as well as a forthcoming compilation on cassette and vinyl, aim to document the artists that have presented and performed at Curl’s open and inclusive events in South and East London. The compilation was available on cassette at Park Nights. Among those that are also featured on this compilation are Tirzah, Kwake Bass, Suitman Jungle, TØNE, Raisa K, Klein and many more.

Looking to extend Curl’s ideas on openness, chats’ RIDERS was an installation that wanted to unify audience and performer by bringing spare riders, with an accompanying text by Hatty Nestor.

Curl is a community of tight-knit friends native to or living in South East London, focused on performing, selecting and releasing music and art. Their goal is to bring, to a wide audience, interdisciplinary practices in music that don’t fit with normalised expectations. This involves crossing the lines between club space and live performance. Their upcoming show formulated especially for the Serpentine Pavilion aims to extend this open-ness. Their community is led by musicians Coby Sey, Micachu, and emcee Brother May. They have been putting on events, usually on Sunday evenings at Rye Wax in Peckham and The Yard in Hackney Wick since 2016. Their events recall numerous amount of years playing and performing music at house-parties and concerts, and involve the many musicians who have contributed to the British progressive and post-genre community that is represented by artists like The xx, Kate Tempest, Kwes, Micachu & the Shapes, Farai and many more. 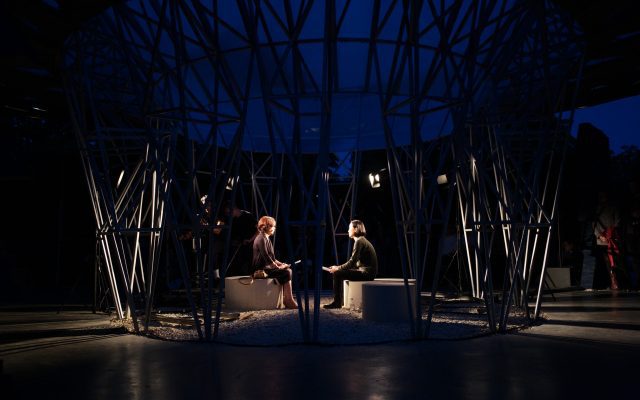 The annual series of experimental and interdisciplinary encounters, sited in the Serpentine Pavilion designed by Francis Kéré.