The Call of the Drum

Originally conceived for their first duo-performance in the context of Peter Conradin Zumthor’s solo-programme Die Nagelschmiede (Theater Chur, June 4/5, 2011, directed by Fritz Hauser), the two percussionists adapted Hauser’s composition to the Serpentine Gallery Pavilion 2011 designed by Peter Zumthor. Based on a ritualistic bass-drum pattern the form dissolves into a free exchange of sounds and noises, using space and distance to create new sound perspectives.

Born in 1979, for years Peter Conradin Zumthor has been present on international stages with innovative and specialised music. Concert tours brought him to a dozen countries from Mozambique to the Ukraine. He is the initiator of several national and international projects and bands. His field of activities ranges from first performances of new music, composing of architectural, site-specific music, to literature-specific music, to pure improvisations. He has collaborated closely with composers Felix Profos and David Dramm, musicians Lucas Niggli, Dominik Blum, Vera Kappeler, Achim Escher & Marek Otwinowski, Barry Guy, Fritz Hauser, Kesivan Naidoo, Rolando Lamussene, as well as with Ukrainian writer Yuri Andruchowych. 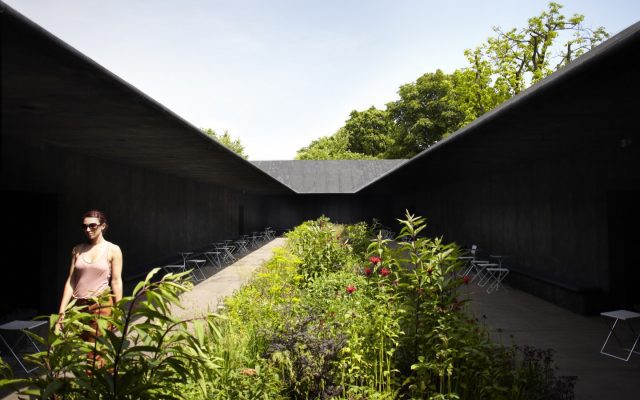 The 2011 Pavilion by Peter Zumthor was his first completed building in the UK and included a specially created garden.