A semi-translucent, cylindrical structure that resembled a shell and rested on large quarry stones, the 2014 Pavilion occupied 350 square metres of the Serpentine’s lawn and was home to and inspiration for the Park Nights series of events.

Smiljan Radić’s design for a temporary Pavilion has its roots in the architect’s earlier work, particularly The Castle of the Selfish Giant, a papier-mâché model inspired by the Oscar Wilde story, and the Restaurant Mestizo – part of which is supported by large boulders.

Designed as a flexible, multi-purpose social space, the Pavilion had a café sited inside. Visitors were encouraged to enter and interact with the structure in different ways throughout its four-month tenure in the Park. On selected Friday nights, between July and September, the Pavilion became the stage for the Galleries’ Park Nights series, sponsored by COS: eight site-specific events that brought together art, poetry, music, film, literature and theory, including three new commissions by emerging artists Lina Lapelyte, Hannah Perry and Heather Phillipson.

Radić has completed the majority of his structures in Chile. His commissions range from public buildings, such as Restaurant Mestizo, Santiago and domestic buildings, such as Copper House 2, Talca, to small and seemingly fragile buildings, such as the Extension to Charcoal Burner’s House, Santa Rosa. Considerate of social conditions, environments and materials, Radić moves freely across boundaries, avoiding any specific categorisation within one field of architecture. This versatility enables him to respond to the demands of each setting, whether spatial constraints of an urban site or extreme challenges presented by a remote rural setting, mountainous terrain or the rocky coastline of his native Chile.

Drawing and model-making are an integral part of Radić’s design process. In an interview with Julia Peyton-Jones, Radić said: “My projects may take strange forms or shapes in the end, but my beginning is always about the material and the tectonics of the material, how it works in particular shapes. That’s really important. All my models are very expressive. I try to create some relationship within them to demonstrate how the materials that will be employed for the build will be used.”

“The Serpentine Pavilion 2014 continues a history of small romantic constructions seen in parks or large gardens, the so-called follies that were popular from the late sixteenth century to the beginning of the nineteenth century.

In general, follies appear as ruins or have been worn away by time, displaying an extravagant, surprising and often archaic form. These characteristics artificially dissolve the temporal and physical limits of the constructions into their natural surroundings. The 2014 Pavilion takes these principles and applies them using a contemporary architectural language..

The unusual shape and sensual qualities of the Pavilion have a strong physical impact on the visitor, especially juxtaposed with the classical architecture of the Serpentine Gallery. From the outside, visitors see a fragile shell in the shape of a hoop suspended on large quarry stones. Appearing as if they had always been part of the landscape, these stones are used as supports, giving the pavilion both a physical weight and an outer structure characterised by lightness and fragility. The shell, which is white, translucent and made of fibreglass, contains an interior that is organised around an empty patio at ground level, creating the sensation that the entire volume is floating. The simultaneously enclosed and open volumes of the structure explore the relationship between the surrounding Kensington Gardens and the interior of the Pavilion. The floor is grey wooden decking, as if the interior were a terrace rather than a protected interior space.

At night, the semi-transparency of the shell, together with a soft amber-tinted light, draws the attention of passers-by like lamps attracting moths.”

AECOM provided engineering and technical design services, as it did for the first time in 2013. In addition, AECOM acted as cost and project manager for the 2014 Pavilion. While this was the second Serpentine Galleries Pavilion for AECOM, its global chief executive for building engineering, David Glover, has worked on the designs for a majority of the pavilions to date. The Serpentine Galleries were delighted that J.P. Morgan Private Bank were the co-headline sponsor of 2014 Pavilion. 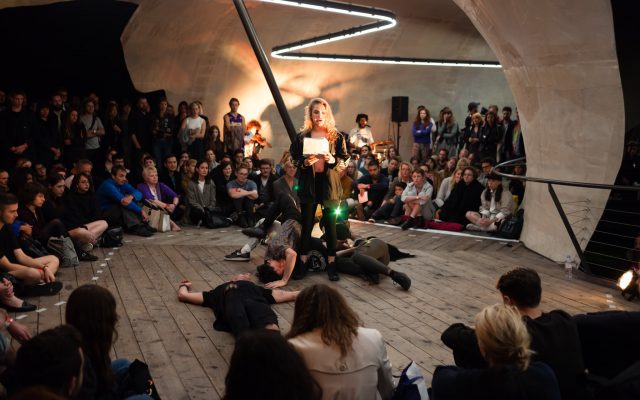 Radić, architect of the 2014 Pavilion, discussed the concepts behind his design, followed by a talk by Justin McGuirk.

Maria Lisogorskaya and Fran Edgerley invited the public to attend a ceremonial ritual; a builder's rite for the Serpentine Pavilion. A series of walks in and... 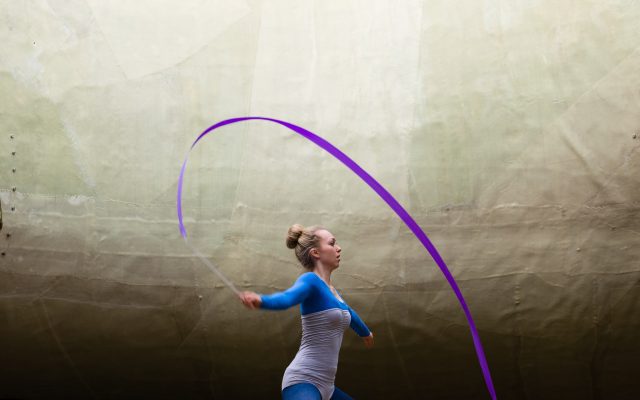 Saturday Walks: Leonor Serrano Rivas, Yet the sky is still the same

Leonor Serrano Rivas performed Yet the sky is still the same, addressing the Serpentine Pavilion's environment.

Inspired by the 2014 Serpentine Pavilion, Liam Young led a wander through speculative botany.