During the exhibition Rosemarie Trockel: A Cosmos, Berlin-based dancer Nefeli Skarmea and artist and educator Polly Brannan took up residency within the Sackler Centre of Arts Education at the Serpentine Gallery.

Inspired by the objects and artworks in the exhibition as well as the concept of ‘a cosmos’, participants were invited to alter their surroundings through moving and making.

This interdisciplinary residency included a presentation by Skarmea and Brannan on their current practices; a series of practical, pre-booked workshops; a family day and public drop-in discussion seminars as part of the Saturday Seminar programme.

The Studio was supported by the Goethe-Institut London.

Wednesday 20 February, 2pm
The Studio residents Skarmea and Brannan presented and discussed their practices and the aims of their collaboration at the Serpentine Gallery.

Saturday 23 February, 3pm
Claire Feeley and Lucia Pietroiusti, Assistant Curators at the Serpentine Gallery, discussed the exhibition Rosemarie Trockel: A Cosmos, the residency project and the Sound Series introduction to the exhibition by Dominic Eichler.

Saturday 2 March, 3pm
Saturday Seminar: The Thinking Body: A Cosmos by Nefeli Skarmea and Polly Brannan.
Skarmea and Brannan discussed bodies, creatures, movement and dance in the context of Trockel’s exhibition at the Serpentine Gallery. Drawing the series of workshops to a close, Skarmea and Brannan addressed the questions raised by Trockel’s work as well as the role of ‘audience member’ and ‘participant’ in the exhibition space.

Sunday 3 March, 12-5pm
Deloitte Family Day: Creative Creatures. Families were invited to join Brannan and Skarmea in exploring the natural world through play and movement, in response to the exhibition Rosemarie Trockel: A Cosmos.

Nefeli Skarmea (b. Athens, Greece) is based in Berlin and studies Cultures of the Curatorial at the Academy of Visual Arts in Leipzig. A dancer with the companies Tanztheater Nuremberg, Stammer Productions/Colette Sadler and Alias/Guilherme Botelho, recent productions include Sideways Rain (2010-2013, touring). Upcoming projects include Martin Creed’s Ballet Work No 1020. In 2010, Nefeli began to collaborate with choreographer Sergiu Matis and visual artist Ladislav Zajac on the production of Doom Room, a movement research project which brought her to residencies in LaborGras, Berlin and Kinitras Studio, Athens. In her curatorial research, Nefeli is interested in the relationships between movement, dance and the gallery space. 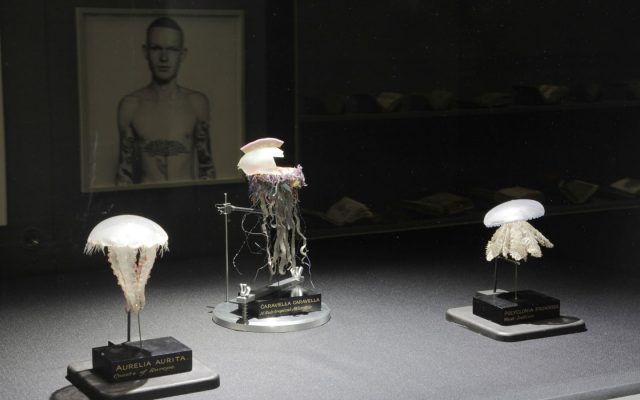 Featuring new works never seen before in the UK, and arranged in a constellation according to type and theme were artefacts, both natural and human.