An exhibition of pioneering artist Barbara Chase-Riboud charts over seven decades of her innovation in sculptural technique, exploring memory, history and power through monumental sculptures and works on paper.

The first UK solo exhibition of artist, novelist and poet Barbara Chase-Riboud (b. 1939, Philadelphia, USA, lives and works in Paris), Barbara Chase-Riboud: Infinite Folds features a focussed selection of large-scale sculptures alongside works on paper dating from the 1960s to the present day. The show marks the UK debut presentation of some never-before-seen pieces, as well as some of the most celebrated works in the artist’s expansive oeuvre.

With a career spanning over seven decades, Chase-Riboud’s innovation in sculptural technique and materiality is characterised by the interplay between folds of cast bronze or aluminium and coils of wool and silk which are knotted, braided, looped, and woven. By combining materials with different qualities such as hard and soft, light against heavy, and tactile versus rigid, Chase-Riboud’s works lend an aesthetic consideration to the sculptural base through the use of fibre ‘skirts,’ speaking to the artist’s interest in crafting forms that unify opposing forces. Parallel to her sculptural practice, Chase-Riboud is a distinguished poet and writer of historical fiction. She gained literary success for her first novel Sally Hemings. Published in 1979, it illuminated the romantic relationship between US President Thomas Jefferson and the enslaved woman, Sally Hemings, revealing that she was the mother to six of his children. Since then, Chase-Riboud has published over ten novels and collections of poetry including Echo of Lions, adapted for screen and known internationally as the highly acclaimed film Amistad.

Committed to foregrounding transnational histories and cultures, Chase-Riboud draws inspiration from her experience living, working and travelling across Western and Eastern Europe, West Asia, North Africa and South-East Asia. Chase-Riboud’s encounters with classical architecture and sculpture, and historical artefacts from Western and non-Western traditions, have informed her recurring fascination with the public monument. In her major series, The Monument Drawings, and across a selection of sculptures dating from the late 1960s, Chase-Riboud imagines edifices and memorials honouring various historical, cultural, artistic, and literary figures. These include, among others, Sarah Baartman, Malcolm X, Peter Paul Rubens’ mother, Josephine Baker, the Queen of Sheba and King Solomon, Cleopatra, Anna Akhmatova, and Lady Macbeth. These monumental works consider notions of memory, legacy and power, prompting a consideration of which people and events are commemorated, and for whom. On view at Serpentine North in Kensington Gardens where public statues frame the landscape, Barbara Chase-Riboud: Infinite Folds highlights the often-unacknowledged figures that continue to shape our impressions of the past and present.

Parallel to her visual and sculptural practice, Chase-Riboud is a distinguished poet and writer of historical fiction. In 1974 she published her first book of poetry, From Memphis & Peking, which was edited by Toni Morrison, and in 1979 she published her first novel Sally Hemings. Her poetry collections include Portrait of a Nude Woman as Cleopatra (1987) and Everytime a Knot is Undone, a God is Released (2014), and her widely translated novels include: Valide: A Novel of the Harem (1986); Echo of Lions (1989); The President’s Daughter (1994); Hottentot Venus: A Novel (2003); and The Great Mrs. Elias: A Novel (2022). In October 2022, Princeton University Press will release I Always Knew: A Memoir, an intimate and vivid portrait of Chase-Riboud’s life as told through the letters she wrote to her mother, Vivian Mae Chase, between 1957 and 1991.

Financial Times: With an exhibition at London’s Serpentine, the 83-year-old Philadelphian is getting overdue recognition

The Guardian: “The artist danced with James Baldwin, was helped by Jacqueline Kennedy Onassis and sculpted Malcolm X. Now she’s received the only honour she ever wanted.”
The Art Newspaper: “The US sculptor, poet and historical novelist Barbara Chase-Riboud has had an incredible career spanning seven decades.”
ARTNews: “For decades, the artist and writer Barbara Chase-Riboud has focused on assembling what she calls her “pantheon of invisibles,” people whose values and lives she renders present and permanent.”
Frieze: “The artist speaks with Terence Trouillot about how her art and writing have finally met”
Artforum: Barbara Chase-Riboud’s Top Ten.
Wallpaper*: “If Chase-Riboud’s practice is deeply invested in the notion of the public monument, her oeuvre is anti-canonical in its elegant disruption of established aesthetic conventions, and her choice of subject matter.”
T Magazine: “As two new retrospectives consider the staggering scope of the artist’s career, she reflects on seven decades of creativity.”
Serpentine North Gallery 11 October 2022 — 10 April 2023 Free
BOOK NOW 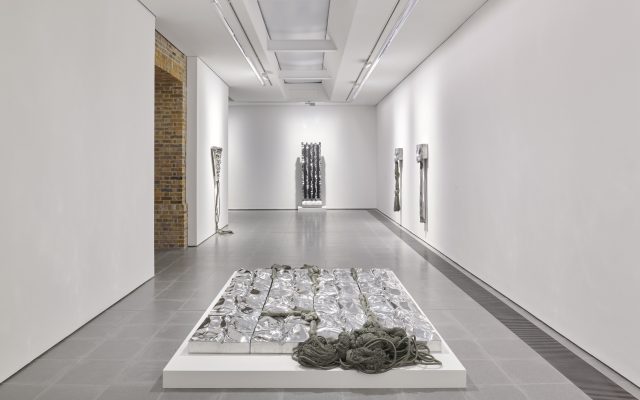