On the occasion of Arthur Jafa‘s exhibition, Professor Saidiya Hartman (Columbia University) joined scholars, artists and writers to discuss themes from her landmark text Scenes of Subjection, including questions of political economy and ecology, race, gender and legal theory. Presented in collaboration with Dr Rizvana Bradley (Yale University), with support from Women & Performance, a journal of feminist theory.

Throughout his practice, Francis Alÿs consistently directs his distinct poetic and imaginative sensibility toward anthropological and geopolitical concerns centred around observations of, and engagements with, everyday life, which the artist himself has described as “a sort of discursive argument composed of episodes, metaphors, or parables.” His multifaceted projects including public actions, installations, video, paintings, and drawings and involve travelling the longest possible route between locations in Mexico and the United States; pushing a melting block of ice through city streets; commissioning sign painters to copy his paintings; filming his efforts to enter the centre of a tornado; carrying a leaking can of paint along the contested Israel/Palestine border; and equipping hundreds of volunteers to move a colossal sand dune ten centimetres. Born in 1959 in Antwerp, Belgium, Alÿs originally trained as an architect. He moved to Mexico City in 1986, where he continues to live and work, and it was the confrontation with issues of urbanisation and social unrest in his new country of adoption that inspired his decision to become a visual artist.

Rizvana Bradley is Assistant Professor of Film and Media Studies and African-American Studies at Yale University. She holds a BA from Williams College and a PhD from Duke University. She was a Helena Rubinstein Critical Studies Fellow at the Whitney Museum of American Art. Her forthcoming book received a Creative Capital | Andy Warhol Foundation Arts Writers Grant. She was the guest editor of a special issue of the journal Women and Performance: a journal of feminist theory, and has published articles in TDR: The Drama Review, Discourse, Rhizomes, and Black Camera. She was also recently appointed Assistant Editor at the journal, boundary 2.

Helen Cammock studied BA Photography at The University of Brighton and graduated from the Royal College of Art in 2011. Her practice uses photography, video, poetry, writing, spoken word, song, printmaking and installation. Her work has recently been screened and exhibited at venues including the Serpentine Cinema series; Open Source Contemporary Arts Festival; as part of Tate Artists Moving Image Screening Programme, Tate Britain, and at Hollybush Gardens gallery, London. She has written for Photoworks and Aperture magazines and was shortlisted for the Bridport poetry prize in 2015. Helen has had work published in The Photographers’ Gallery journal Loose Associations and published a new artist book and vinyl 12” with Bookworks, London in April 2017. She has a solo show at Cubitt, London in later this year. Helen was co-director of Brighton Photo Fringe Festival for 4 years.

Tina Campt is Claire Tow and Ann Whitney Olin Professor of Africana and Women’s Gender and Sexuality Studies, Director of the Barnard Center for Research on Women, and Chair of the Africana Studies Department at Barnard. Originally trained in modern German history at Cornell University, Professor Campt’s published work explores gender, racial and diasporic formation in black communities in Germany and Europe more broadly. She is the author of three books. Other Germans: Black Germans and the Politics of Race, Gender and Memory in the Third Reich (University of Michigan Press, 2004) is a historical inquiry based on oral histories and archival documents that explores the experiences of Black Germans during the Third Reich. Image Matters: Archive, Photography and the African Diaspora in Europe (Duke University Press, 2012) theorises the affects of family photography in early twentieth century Black German and Black British communities. Her most recent book Listening to Images (Duke University Press, 2017) theorises the everyday practices of refusal and fugitivity enacted in a frequently overlooked genre of black vernacular photographs she calls ‘quiet photography’.

Kodwo Eshun is Lecturer in Contemporary Art Theory at Goldsmiths, University of London, Visiting Professor at Haut Ecole d’Art et Design, Genève and co-founder of The Otolith Group. He is the author of Dan Graham: Rock My Religion, 2012, and More Brilliant than the Sun: Adventures in Sonic Fiction, 1998, and co-editor of The Fisher Function, 2017, Post Punk Then and Now, 2016, The Militant Image: A Cine-Geography: Third Text Vol 25 Issue 1, 2011, Harun Farocki Against What? Against Whom, 2010 and The Ghosts of Songs: The Film Art of the Black Audio Film Collective 1982–1998, 2007.

Denise Ferreira da Silva, PhD is Director of The Social Justice Institute (GRSJ) at the University of British Columbia. She is also a Visiting Professor of Law at Birkbeck University of London (UK) and Adjunct Professor of Curatorial Practice at MADA-Monash University (Australia). Her academic writings and artistic practice address the ethical questions of the global present and target the metaphysical and onto–epistemological dimensions of modern thought. Academic publications include Toward a Global Idea of Race (University of Minnesota Press, 2007) and the edited volume Race, Empire, and The Crisis of the Subprime (with Paula Chakravartty, Johns Hopkins University Press, 2013). She has written for publications of the 2016 Liverpool and Sao Paulo Biennials as well as for the 2017 Documenta 14 – Reader and Venice Biennale. Her artistic work includes collaborations, such as the films Serpent Rain (with Arjuna Neuman), 2016 , and From Left to Night (with Wendelien van Oldenborgh), 2014, and the play Return of the Vanished Peasant (with Rosalind Martin) as well as events and texts that are part of her Poethical Readings practice (with Valentina Desideri). She was an advisor to Natasha Ginwala, curator of the Contour 8 Biennale (Mechelen, 2017).

Jack Halberstam is Professor of English and Gender Studies at Columbia University. Halberstam is the author of five books including The Queer Art of Failure (Duke UP, 2011) and Female Masculinity (Duke UP 1998) and just finished a book titled Trans*: A Quick and Quirky Account of Gender Variance (UC Press, 2017 forthcoming). He is also working on a book on wildness.

Saidiya Hartman received her B.A. from Wesleyan University (1984) and Ph.D. from Yale University (1992). Professor Hartman’s major fields of interest are African American and American literature and cultural history, slavery, law and literature and performance studies. She is on the editorial board of Callaloo. She has been a Fulbright, Rockefeller, Whitney Oates and University of California President’s Fellow. She is the author of Scenes of Subjection: Terror, Slavery, and Self-making in Nineteenth Century America (Oxford University Press,1997) and Lose Your Mother: A Journey Along the Atlantic Slave Route (Farrar, Straus and Giroux, 2007). She has published essays on photography, film and feminism. She is beginning a new project on photography and ethics.

The Karrabing Film Collective is a grassroots Indigenous based media group. Filmmaking provides a means of self-organisation and social analysis for the Karrabing. Screenings and publications allow the Karrabing to develop a local artistic languages and forms and allow audiences to understand new forms of collective Indigenous agency. Their medium is a form of survivance—a refusal to relinquish their country and a means of investigating contemporary social conditions of inequality. The films represent their lives, create bonds with their land and intervene in global images of Indigeneity.

Nathaniel Mackey is the author of six books of poetry, the most recent of which is Blue Fasa (New Directions, 2015); an ongoing prose work, From a Broken Bottle Traces of Perfume Still Emanate, whose fifth and most recent volume is Late Arcade (New Directions, 2017); and two books of criticism, the most recent of which is Paracritical Hinge: Essays, Talks, Notes, Interviews (University of Wisconsin Press, 2005). He is the editor of the literary magazine Hambone, coeditor, with Art Lange, of the anthology Moment’s Notice: Jazz in Poetry and Prose (Coffee House Press, 1993) and coeditor, with Michael Bough, Kent Johnson and others, of the anthology Resist Much / Obey Little: Inaugural Poems to the Resistance (Dispatches Editions/Spuyten Duyvil, 2017). His awards and honours include the National Book Award for poetry (2006), the Stephen Henderson Award from the African American Literature and Culture Society (2008), a Guggenheim Fellowship (2010), the Ruth Lilly Poetry Prize from the Poetry Foundation (2014), the Bollingen Prize for American Poetry from the Beinecke Library at Yale University (2015), the William B. Hart Residency in Poetry at the American Academy in Rome (2016), and the Rebekah Johnson Bobbitt National Poetry Prize from the Library of Congress (2017). He is the Reynolds Price Professor of Creative Writing at Duke University.

Christian Nyampeta’s work develops an artistic and theoretical enquiry into contemporary African/a philosophy and the ascetic practices of the late antiquities. Through staging workshops and programmes of art and design, Nyampeta’s work creates spaces, times, fictions, models, dialogues and commentaries, concerned with the idea of communality and its discontents. Nyampeta convenes the Nyanza Working Group of Another Roadmap Africa Cluster. He runs Radius, an online and occasionally inhabitable radio station and he is a research student at the Visual Cultures Department at Goldsmiths, University of London.

Rahul Rao is Senior Lecturer in Politics at SOAS University of London. He has research interests in international relations theory, the international relations of South Asia, comparative political thought and gender and sexuality. He is currently working on a book on queer postcolonial temporality. His first book Third World Protest: Between Home and the World (Oxford University Press, 2010) explored the relationship between cosmopolitanism and nationalism in postcolonial protest. He is a member of the Radical Philosophy collective and blogs occasionally at The Disorder of Things.

Karen Salt co-directs the Centre for Research in Race and Rights at the University of Nottingham where she works on race, trust, power and sovereignty. A significant portion of her work investigates how black nation states and global minority communities fight for their continued sovereignty in a highly racialised world. A sought-after national and international speaker on race and politics, she frequently engages with students, collaborates with community organisations and advises governmental bodies on aspects of power and social justice.

Hypatia Vourloumis is a performance theorist teaching in Athens and holds a Ph.D in performance studies from NYU. Her research interests include modern Greek and postcolonial South East Asian cultural production and more broadly performance theory, philosophies of language, critical race, feminist, queer theory, anti-colonial thinking and practice and popular culture. She has published numerous articles, is co-editor of Performance Research issue on ‘Institutions’ and is completing a book on Indonesian post-colonial paralinguistic performance and a monograph on contemporary Greek art, performance and activism. 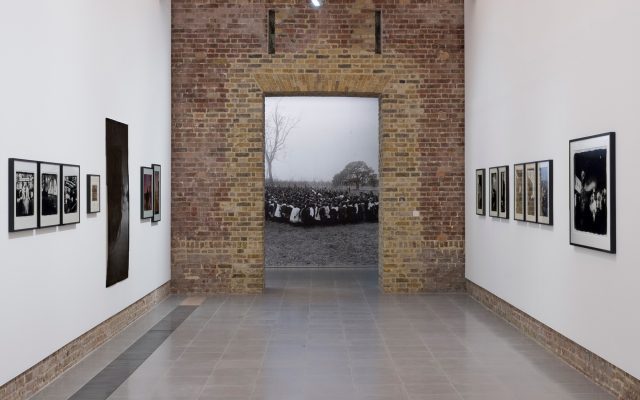 The Serpentine presented the work of the acclaimed US filmmaker, cinematographer and artist Arthur Jafa.