The first exhibition of the work of Mark Wallinger at the Serpentine Galleries.

This, the first of two exhibitions to date of the work of Mark Wallinger at the Serpentine Galleries, featured just two works. The first of these works, Tattoo (1987), was a triptych painted on a PVC ground sheet and involved the word ‘MUM’ stencilled onto the national flag, thereby subverting two emotive motifs in one stroke.

In Stately Home (1985), Wallinger hijacked the conventions of topographical engraving for his own provocative ends. Writing about the work for the Guardian some 13 years later, Jonathan Jones states: “Stately Home remakes history with deranged abandon. Wallinger has enlarged an 18th-century mezzotint print subtitled ‘Hare Hall in Essex, the Seat of John Arnold Wallenger Esq’, and crossed out the ‘e’ in Wallenger and replaced it with an ‘i’. In the picture, ladies and gentlemen take the air in their private parkland. To the left is an ornamental canal with a man punting and then, there’s something out of place, though perfectly in style. A servant stands in the water carrying his master on his shoulders, so the red-coated landowner can hold the skinny claws of a tyrannosaurus rex. The aristocrat and the dinosaur appear to be dancing. Oh no he isn’t, oh yes he is.”

The exhibition served as a taster for Wallinger’s second outing at the Serpentine eight years later in the spring of 1995. 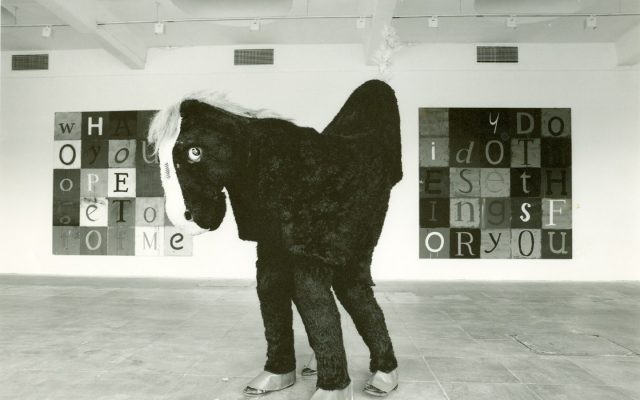 This was the first major solo presentation of British artist Mark Wallinger’s work.