Nikita Gale considers the cyclical nature of performance and memory in Theaster Gate’s Serpentine Pavilion 2022: Black Chapel through a series of annotated notes.

“By and by all trace is gone, and what is forgotten is not only the footprints but the water too and what it is down there. The rest is weather. Not the breath of the disremembered and unaccounted for, but wind in the eaves, or spring ice thawing too quickly. Just weather. Certainly no clamor for a kiss.” – Toni Morrison

Considering Black spaces of worship and congregation, Nikita Gale returns to this quote from Toni Morrison’s Beloved (1987) to examine Theaster Gate’s Serpentine Pavilion 2022: Black Chapel. The Black chapel historically served as a multipurpose place where communities were educated, sang, danced, fed, organised themselves politically, gossiped, etc. Gale remembers, as a child, “being really HOT and overheating and sweating in church – it was a space where heat and sweat happened.” In this way, Black Chapel becomes a space where the memory of performance, of breath and exhaust, is trapped like condensation, creating a weather system before being released through the central oculus. Through their notes, Gale returns the physical structure back to the body and the earth. 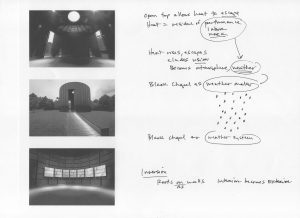 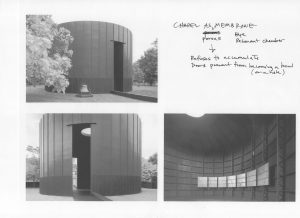 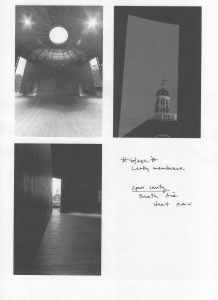 Nikita Gale is an artist living and working in Los Angeles, California. Gale’s work applies the lens of material culture to consider how authority is negotiated within political, social, and economic systems and employs objects and materials like barricades, concrete, microphone stands, and spotlights to address the ways in which space and sound are politicised. Engaging with materials that are simultaneously acoustic and protective like foam and terrycloth, Gale’s recent work considers the role of audience as a social arena and examines the ways in which silence, noise, and visibility function as political positions and conditions. Their work has recently been exhibited at 52 Walker (New York); MoMA PS1 (New York); Kunstraum Kreuzberg (Berlin); Swiss Institute (New York); California African American Museum (Los Angeles); Cubitt (Los Angeles); The Studio Museum in Harlem (New York); and in Made in L.A. 2018 at the Hammer Museum (Los Angeles).

Gale’s first European institutional solo exhibition, IN A DREAM YOU CLIMB THE STAIRS is on view at London’s Chisenhale Gallery until 16 October.