What if aliens were in love with us? What would change?

“This sprawling galactic installation is a mash-up of political, literary and pop culture sci-fi references with a diorama including everyone from Yayoi Kusama to Diana, Princess of Wales.” – The Guardian

Alienarium 5 is a speculative environment that invites us to imagine possible encounters with extraterrestrials. Dominique Gonzalez-Foerster’s first major institutional solo show in the UK since TH.2058 at Tate Modern’s Turbine Hall in 2008, the exhibition is a culmination of her decades-long interest in science fiction and continued research into deep space and alien life. Conceived site-specifically for Serpentine, the exhibition will feature almost entirely new work that engages both the gallery’s internal and external space.

Gonzalez-Foerster is a leading artist of her generation. Working experimentally, she has collaborated with Serpentine on numerous interdisciplinary projects. Engaging with the exhibition as a medium, Gonzalez-Foerster’s spatial inventions and investigations probe the notion of display, as well as how an image or scene is experienced. Drawing on wide-ranging references from music, literature, film, architecture and pop culture, the artist creates densely layered environments with the ability to transport viewers into alternative narrative, temporal and psychological dimensions.

For Alienarium 5, Gonzalez-Foerster has collaborated with writer and philosopher Paul B. Preciado, musician Julien Perez and parfumier Barnabé Fillion, among others, to transform Serpentine into a spectacular and otherworldly environment. A new multi-user VR piece produced by VIVE Arts and developed by Lucid Realities contemplates alternative forms of connection through extraterrestrial embodiment, while an immersive 360-degree collage titled Metapanorama uses outer space as a framework to bring humans, non-humans and extraterrestrials together.

Connecting to Serpentine’s historical role as a tea house and a site of rendezvous, Alienarium 5 serves as a meeting point for friends from the past, the present and a time not yet named. Welcoming visitors into a world of expanded possibility the exhibition is, in the artist’s words, “a mutant place contributing to the invention of new technologies of consciousness. It is an anti-War of the Worlds vision”.

Alienarium 5 is a proposal for freedom and interspecies connection. It is an experimental place in which to discover new forms of love and to imagine possible encounters with visitors from outer space.

To keep up to date with late openings and other Alienarium 5 programmes please sign up to the Serpentine Newsletter here.

Dominique Gonzalez-Foerster (b. in 1965 in Strasbourg, France) metabolises cinematographic, literary, architectural, musical and pop references to create spaces that investigate the implicit neutrality of artistic practice and display.

Beginning with her participation in the 1992 Exhibit A: Eight Artists from Europe and America and in Serpentine’s Poetry Marathon in 2009, Gonzalez-Foerster has worked closely with the Serpentine for many years. In this time, she has appeared together with writer Enrique Vila-Matas for Park Nights (2010), was involved in the Garden Marathon (2011), Memory Marathon (2012), Transformation Marathon (2015), GUEST, GHOST HOST: MACHINE Marathon (2017), and has done a live concert and EP Release of Exotourisme (2018) for which she also collaborated with musician Perez.

Alienarium 5 is a vision that extends beyond the walls of Serpentine. Download the free arts and culture app, Bloomberg Connects, to access an audio guide that can accompany your walk in and out of Hyde Park and Kensington Gardens. The audio guide includes an introduction to Dominique Gonzalez-Foerster: Alienarium 5 by curator Claude Adjil and a soundtrack made by the artist with musician, Julien Perez. 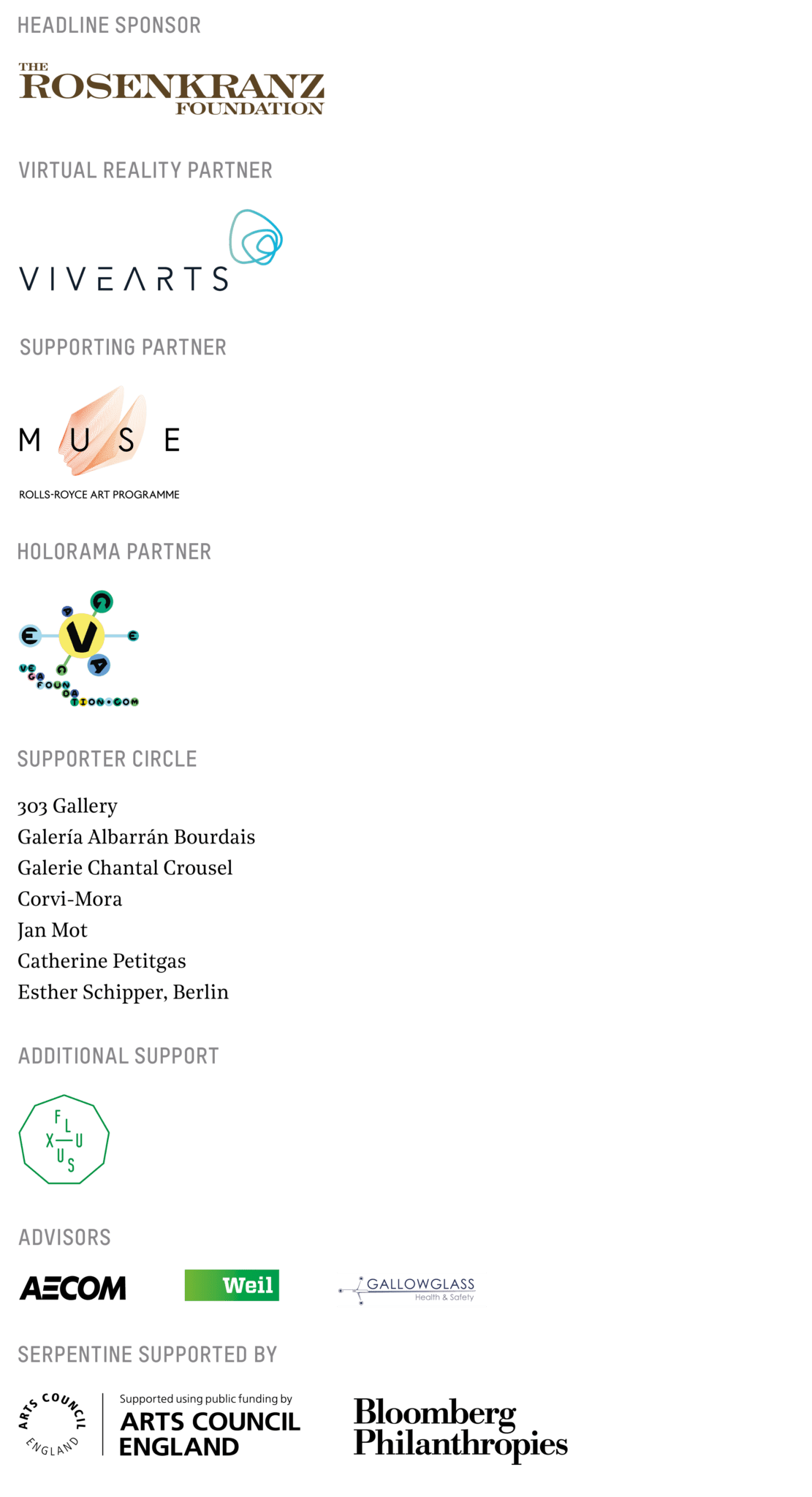 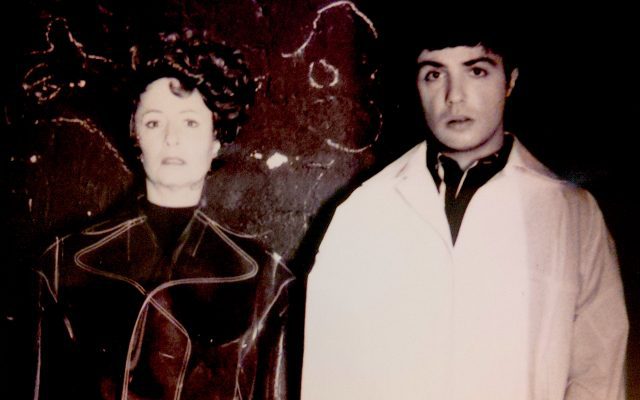 Join us at 8pm on Tuesday 30 August for a concert by Exotourisme, the final live programme for Dominique Gonzalez-Foerster’s exhibition, Alienarium 5. 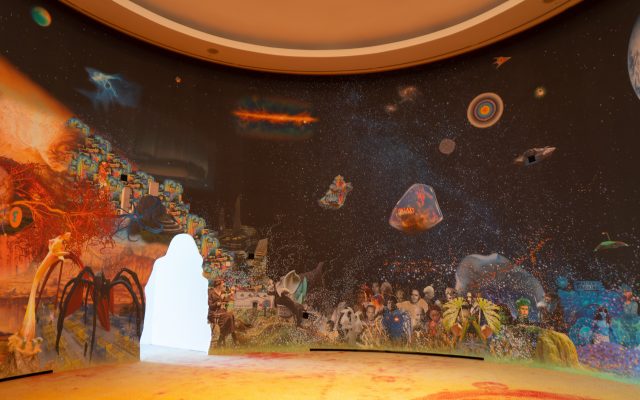 Alienarium 5: Poetry and Spiritualism in the Metapanorama, with Tatiana Kontou and Precious Okoyomon

Join us for an evening exploring ‘Poetry and Spiritualism’ inside Dominique Gonzalez-Foerster’s exhibition, Alienarium 5. 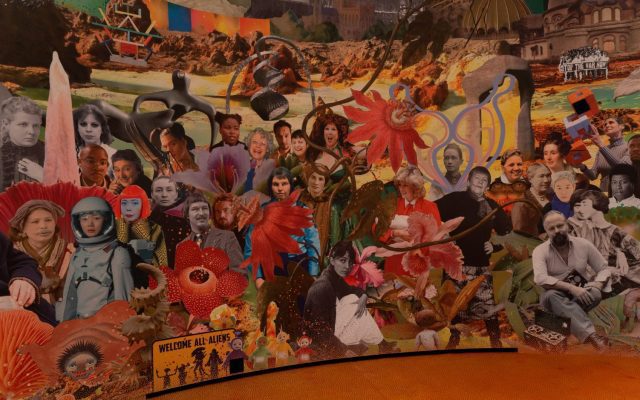 From 3 to 5pm on Saturday 28 May, a number of characters from Dominique Gonzalez-Foerster’s immersive 360-degree collage, Metapanorama, will appear as Live...